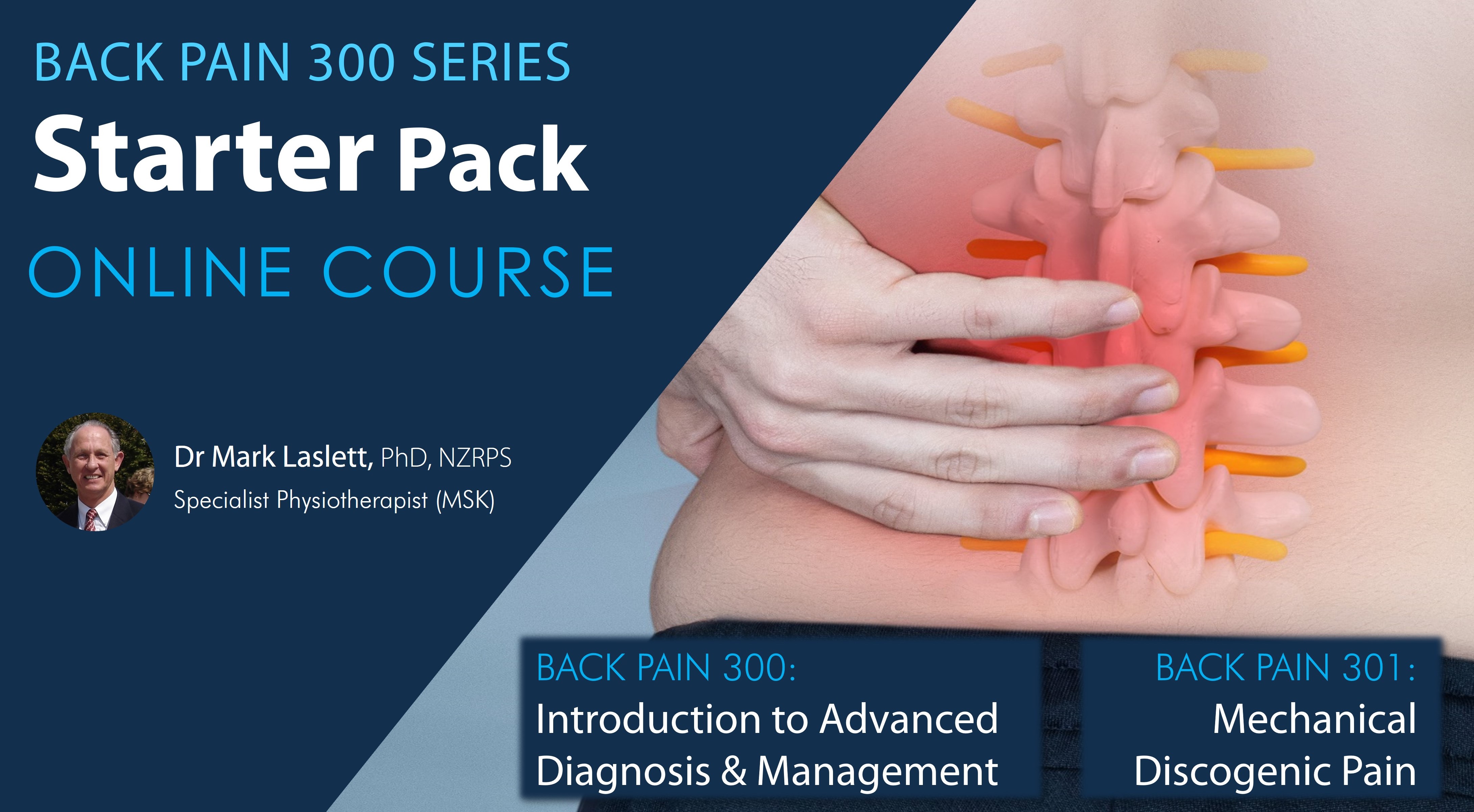 The Back Pain 300 series of courses is a programme of study designed for physiotherapists, medical practitioners and other health care providers who have experience with managing people with persistent low back pain and referred lower limb pain.

The Back Pain 300 Starter Pack includes Back Pain 300, and 301 courses that provide an overview of sources of causes of low back pain and introduces the concept of discogenic pain.

Back Pain 300: Introduction to Advanced Diagnosis and Management covers: After graduation as a physiotherapist in 1971, Mark owned and operated his own private practices in Auckland from 1972-2001, including a specialist Spine Care Clinic (1991-1997). He completed the Diploma in Manipulative Therapy in 1976 and the Diploma in Mechanical Diagnosis and Therapy in 1991. Mark moved to Christchurch in 2005 and has practiced as an independent musculoskeletal consultant for PhysioSouth Ltd since then.

Mark was a manipulative therapy instructor for the spine and upper and lower extremities for the NZ Manipulative Therapists Association 1980-1988 and was president 1988-89. He commenced teaching mobilization and manipulation workshops for the McKenzie Institute International as an international instructor in 1985 and added his own courses on the upper and lower extremities in 1990. Mark ceased active involvement in the McKenzie Institute in 1997. He has presented about 250 short courses in Scandinavia, Europe, North America and Australasia, and has presented at many international conferences with free papers and as keynote presenter. Most recently in 2013 he has completed a teaching tour of courses and conferences that included presentations in Finland, Germany, The Netherlands, Denmark, France and the USA.

His academic and research interest is in the theory and practice of diagnostics as distinct from therapeutics. He has over 40 publications, contributed chapters to two multi-author books and published his own text Mechanical Diagnosis and Therapy: The Upper Limb in 1996. See Reference List at end of this brief biography. Mark commenced doctoral studies at the University of Linköping, Sweden in 2001, successfully defending his thesis “Diagnostic accuracy of the clinical examination compared to available reference standards in chronic low back pain patients” in 2005. He became a Fellow of the New Zealand College of Physiotherapy in 2007 and served as a member of its Academic Board 2008-2014. He was a senior Research Fellow for AUT University from 2008-2012 supervising doctoral and Master’s research projects. He became the first physiotherapist to be registered as a clinical specialist in February 2014. Mark was made an honorary Life Member of Physiotherapy New Zealand in September 2014, and of the New Zealand Manipulative Physiotherapists Association in 2015. He continues to practice as a consultant clinician and remains active in clinical research.

Painful musculoskeletal disorders of the spine and extremities with special emphasis on persistent low back, neck and shoulder pain. Musculoskeletal diagnostics (as distinct from therapeutics) remains an ongoing research interest.

He is currently working with Dr Tom Petersen of Copenhagen on updating their lumbar spine classification system (2003) and with Dr Arianne Verhagen of Erasmus University in updating the systematic review of tests for lumbar radiculopathy. He is currently adjunct research fellow at AUT University on the basis of supervising a doctoral candidate whose research is based on the diagnostic accuracy of the clinical examination of the hip.

Email
We suggest moving this party over to a full size window.
You'll enjoy it way more.
Close
Go Fullscreen